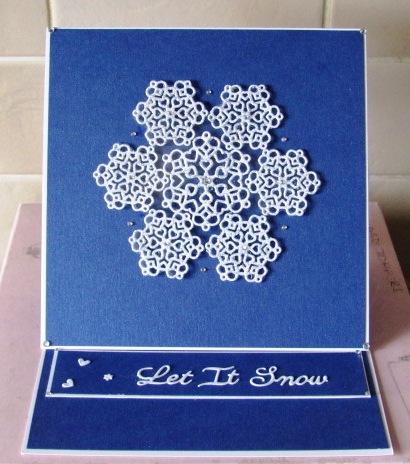 I thought I would share the making of this snowflake easel card with you today. I hope you like it.To make this snowflake card I used a 6″ square easel card.  Also a sheet of A4 midnight blue shimmer card, which is cut and glued to the front and bottom of the card. This completes the first layer.

Attaching the snowflake in the centre of the front part of the easel card I used some silicone glue.This is to give it a lifted dimensional look.

On the bottom of the easel card I added wording using a Let it Snow. Which is dia cut out from some glitter card. This is mounted on a separate blue shimmer card as as a banner. Then attached to the bottom of the card to form the easel effect. The banner has gems in the corners more for practical reasons than decoration. It stops the card sliding open.

I also added some small gems round the snowflake for a bit of sparkle.